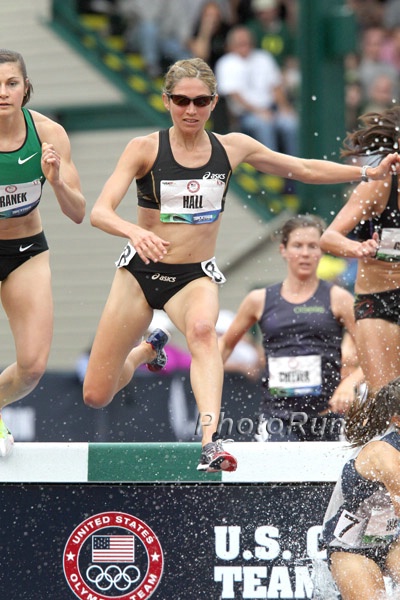 I recently competed at the US Olympic Trials in the 3,000 Steeplechase and fell one lap short of my dream of making the Olympic team. Though it never ceases to be painful when I fall short of attaining a goal, I firmly believe after years in this sport that the journey is what matters more than the final outcome. I want to share some of my journey with you, with hopes that when you too experience the death of a dream, you can perhaps identify with what I have been through.

When I first began competing at the age of 13, winning came easy. In fact, I started competing with the boys because I was winning girls races by over 2 minutes, and even still, usually won or placed 2nd against the boys. Though this fueled my love for running and competing, it also set me up with an “anything less than winning is not acceptable” mentality. As I’ve grown up, I’ve realized how much I was drawing my identity from how successful I was as a runner. If I was competing well, in my eyes I was a success, but if I competed poorly, I saw myself as a failure. Fortunately God used some rough patches in my career to show me that my identity is not based in what I do, but in who He created me to be and who He says that I am. Now I make sure to spend time hearing from God and from others on how God sees me, the plans He has created me for, and shape my identity from that.

Once your identity is secure, than you are free to take risks and go after dreams, because you no longer fear failure. There have been times in my career where I was more nervous I’d fail than excited to succeed- and this was because the failures were shaking my identity. But now that my identity is secure, I rarely ever get that feeling of nervous dread before races, I am excited and peaceful going in, more focused on how much I love to compete and run all-out than worried it might not go well. That is how this whole year has been leading up to the Olympic Trials. Even when some of my steeples early on were sub-par performances, rather than letting that rattle my confidence and let fear enter in, I shifted my focus to what my goal was and how excited I was to be running towards it. The day of the Olympic Trials I experienced so much more peace than in other years, and I am so thankful for God’s grace in growing me in this area.

I have also learned that, unfortunately, as much as we would like them to be, our bodies are not machines and do not always cooperate as we would like them to. After 15 years of competitively racing, I’ve become quite aware of this, and though it can be frustrating at times, I have learned that the number one thing you can focus on is giving your best and walking away from the race with no regrets. When you’ve given your all, you have to trust that even if your best wasn’t good enough, that God will use it to “work all things together for your good” (Romans 8:28).

So what happens when you don’t accomplish your goal? Well, I believe it’s totally normal to get really bummed out, as I did after the Trials. I was devastated and let myself mourn the death of the dream. I had really believed it was going to happen and that Ryan and I were going to walk hand-in-hand into the Opening Ceremonies. But amidst the pain, I intentionally kept my focus looking outward and forward rather than backwards and inwards. Rather than getting really introspective and analyzing what went wrong, why didn’t I have that last gear, what could I have done differently, how did this happen and being tormented by these thoughts, I instead got together with my friends and family and let them embrace me with their unconditional love. I hung out with Jesus and let him encourage me. I picked a new goal and kept moving forward. Then, after some of the frustration and disappointment had worn off, it was a good time to meet with the coach and analyze the race and what we could do to improve both the race and preparation next time. And after a few days, I felt a lot more like myself, because I realized that I don’t just do this solely for the end result, but I do this because I love it and feel called to it, and that doesn’t change when you don’t meet your goal. When you are enjoying the process and letting it shape you as a person along the way you realize the value of the journey.

Another thing I’ve learned is to keep your head up and keep looking for signs of God’s redemptive work. I have already seen little glimpses of how God has used my Olympic Trials race to teach me things, and am constantly looking for what He is up to. It’s always easier to see these things in hindsight and see how His hand has fit all the pieces together perfectly, though at the time we can’t see the full picture.

So what’s next? My attention has now shifted to preparing for some fast races in Europe and supporting Ryan in his final buildup to the Olympic marathon. I am excited to experience the Olympics with him as we usually approach things- as a team, together, even though we won’t be official teammates on Team USA. It will be the culmination of a big season of change for us, where we’ve really had to rely on each other and God for support, so I look forward to seeing it all come together on the streets of London.

We will keep you updated! Thank you so much for the prayers and support, we really appreciate them as we continue this journey!