road miles. The short races set me up well for my fastest season opener and 3rd place in the steeplechase (9:42) at Payton Jordan. After the steeple, I ran the Bay to Breakers 12k, placing a close 2nd, a strong race for me but one I would have loved to win in front of my hometown bay area crowd after growing up just north and going to school at Stanford just south. I now head to Boulder Boulder 10k this weekend and look forward to competing on a strong US team with Shalane and Deena, along with Ryan in the men’s race. 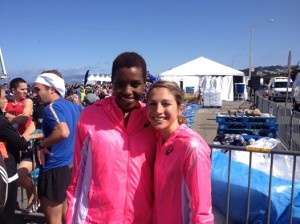 It seems like I have been all over the place when it comes to race distances, but really, it hasn’t felt too unnatural to me. Right now I feel like I am in good 10k shape. My training has been primarily more strength-based by design, but since the speed stuff comes more natural to me, I feel like I can race a bit over and under -distance from there. As I eye even longer distances and a marathon debut, I always want to make sure that I am spending time working on my speed, as I’ve seen that it’s needed to finish well in any even from a marathon to a road mile. So hopping in a couple of road miles, though I hadn’t trained for a mile at that point, were good stimuluses for my body to not forget those “gears”. And mainly I ran them because they are fun! Being a part of Boston Marathon weekend, however small, and the Drake Relays were fun atmospheres to compete in. Payton Jordan was a bit of a surprise to me, I wasn’t expecting to run so close to my PR after not doing much training specifically for a steeple. On my cool down I spent some time chatting with God and actually got a little emotional as I replayed my last few outdoor track races (Spring of 2013). Last season was so difficult, I was trying so hard and things just weren’t clicking, largely due to trying to salvage a season after knee surgery. I was fully focused on doing everything I could to position myself to make the World Team in the steeple, and came up glaringly short. And here I stepped on the track and ran my fastest opener despite feeling unprepared going in and doing most of the work into the wind in the race. It’s moments like this that you realize that running performances do not necessarily correlate with the effort put into the preparation.  It also taught me the importance of building a strong aerobic base, something I didn’t have time to do last year. As I cooled down, I thought about how God has been with me every step of this journey from Day 1 when I fell in love with running at age 13, it has always been me and him going after it together. He not only gave me the gift of some talent but the passion to train hard on my own, running to and from practice in my first year of running (7th grade) and doing hill sprints on the way home, a passion that wasn’t natural. 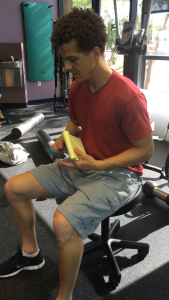 Big thanks to this guy, John Ball (Maximum Mobility, Chandler) for all his help getting back to full-strength post injury!

That passion has gotten fueled by victory and dampened by defeat but he has never let the flame die, encouraging me that there is more. I’ve had many great coaches throughout the years to encourage my running but he has been the constant that has picked me up when I’ve had humiliated finishes and told me I had the strength to keep going when the easy thing to do is quit and move on to something more “safe”. He has been the one when I’ve had thrilling victories that I go back to in the private and give back everything I received, any praise or accolades, realizing He deserves it all, that without Him I would have quit a long time ago. God has been worthy of it all- every drop of sweat in practice and on the track, every tear shed in defeat, he deserves every bit because he created me, and Jesus has died for me so I can be eternally His. It’s these moments that you realize that these races can be about more than just times on a paper that will likely be forgotten a year from now. They can be building history with God. Just like the quality times of training together births beautiful friendships between teammates, it is through the fires of adversity that I have learned God’s character. I have learned his unconditional love for me, that doesn’t change when I get last in a race. I’ve learned how he delights in watching all of us run, fast or slow, just as a loving parent does. He cares about it because he cares about me. And I’ve learned to trust Him and see his hand in my life and how He works everything together for good, even when I can’t see it in the moment. 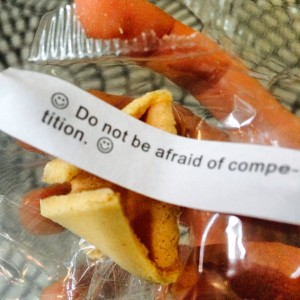 Not shying away from competing this month!

We driven runners are always looking forward to the next race and the next goal, we rarely look back and reflect on the journey we’ve been on, (until maybe our career is over). Of course I love to look back at the times I’ve overcome and succeeded, but when looking back at all my failures I realize I have the strength and courage to go through anything. When you realize that, that there is no need to fear failure, you’ve already been through it, you are free to go after lofty, impossible goals, which is what I feel God calling me to do. And I know He will be with me every step of the way. 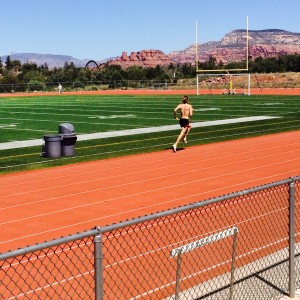 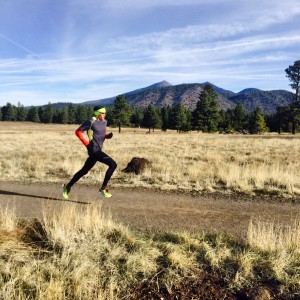