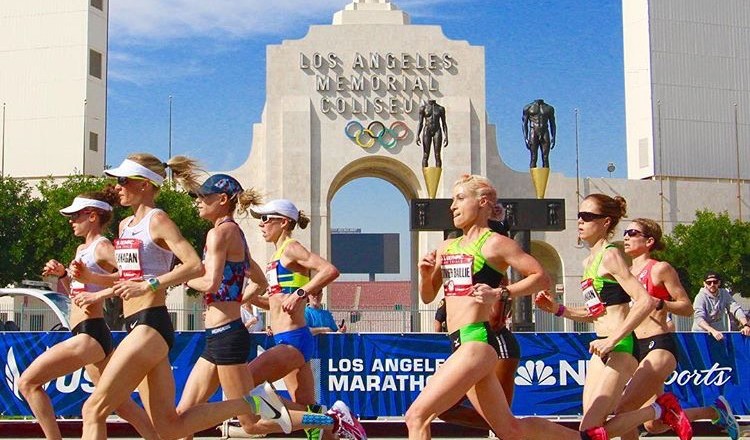 The Olympic Marathon Trials happened on February 13th.  I did not make the team, and far from it- it was the first race I’ve ever had to DNF in, something I had hoped I’d never have to do.  When I toed the line in LA on a blazing hot day, I had incredible peace and expectation filling my heart.  I knew I had done all I could do before getting to the line, and I felt so grateful for how well my training had gone.  It was my best marathon buildup yet, and I felt prepared (even for the heat), 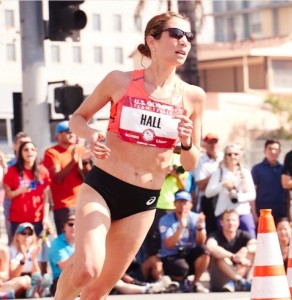 hopeful, and excited.  I executed the plan I had committed to, but after halfway the lead pack pulled further and further away and I struggled to keep my composure.  Eventually my muscles started cramping much like they did at the LA marathon a year before, and though they were not the culprit that kept me from staying in contention, they further hindered me until they were so strong they stopped me in my tracks.  Around mile 17.5 after being jolted into stopping by a strong cramp, I knew in that moment the right thing to do was to step off the course.

As I sat on the curb trying to figure out what to do next, I felt frustrated and confused, but rather than having excuses for myself, I just wished I were better.  I was clearly not nearly as strong as I needed to be for everything that race involved, so far from how prepared I thought I was.  My race plan had not been a “hail Mary” approach, I had believed I belonged there and was capable of seeing the race to the end.  The team that made it to Rio was without a doubt the strongest, and I felt humbled by the race and by those that executed so well on such a challenging day.

I will never forget seeing my kids out on the course at mile 8.5, their excited faces in their matching t-shirts cheering wildly 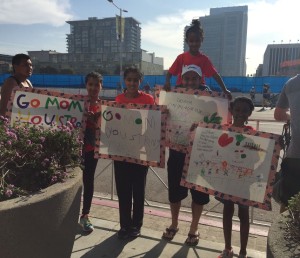 literally made me cry.  Fortunately we were running easy enough at that point that I couldn’t help but wave and blow them a kiss (the next loop, not so much!).  As tough as the conditions were, I will never forget how truly incredible the crowd was and created such an inspiring stage, and that along with seeing my kids further motivated me to want to deliver on that day.  When I saw my kids after the race, I couldn’t help but feel ashamed- of all the races for them to be at it had to be the first one I dropped out of.  But I will never forget the way that they embraced me with their love. Later in the night, when my five year old saw the tears I was trying to hide in the restaurant she said “don’t worry Mommy, when we get home we can go to the circle one (track) and I’ll help you run faster!”.  My 9 year old assured me she would teach me how to run better.  Each one came up to me individually to offer encouragement and help. It was not the fairytale ending of us booking tickets to Rio, but I felt us come together as a family in a deeper way, we became more of a team.

In some ways, it has been easier to get over than I expected, especially considering how strongly I believed the result would be different. I think it’s because I really have no regrets, and regrets are really what will keep you up at night. Not only did I pour my heart out in training, but I loved almost every minute of the journey to that line. I felt so alive and so “me” in the training.  Paces that used to be challenging to hold for six miles I can now hold for 15, week after week. A look at my Instagram feed might leave someone wondering if I even run anymore, but it is quite the opposite, my training is going the best it ever has and I am enjoying it more than I ever have before. I just don’t talk about it that much, mostly because I try to avoid self-promotion.  This training buildup felt like such a sacred process, pouring myself out with joy and thankfulness to God, celebrating the victories with just Him and maybe one or 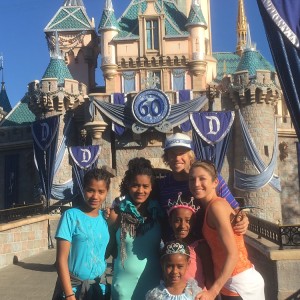 two other people. It gave Ryan and me such a fun project to work on together, and lots of quality time to replace the hours we are used to spending together running. Fortunately the end result didn’t change anything about this.

Two days after the race, ignoring my aching legs, we took on Disneyland.  It began with a parenting fail, starting out on Pirates of the Caribbean (darkness, guns, skeletons, not quite the mellow family ride we remembered) but we had a blast and our kids once again proved that they could take on even the most “over-stimulating” experiences like champs.  Life went on, and it was still beautiful and challenging and rich.  I felt a shift when we got home, a resiliency to believe and hope again, one step at a time.  By inviting my kids into this process, I get to teach them to not let failure discourage them from believing again, and to determine for themselves how to measure success.  For me, that is being faithful with what God has given me towards the things He puts on my heart.  I can be successful no matter how fit my competitors are or no matter what crazy weather is going on or what injury or setbacks I experience- success is being faithful.  At the moment that looks like preparing the best I can for the races ahead- first up, the World Half Marathon Championships in two weeks! I’m not taking for granted any opportunity to 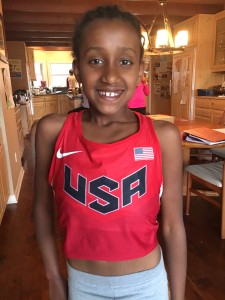 represent the USA, and I’m already starting to sharpen my track spikes as I eye the Olympic Track Trials in July. New season, new goals, but the same passion.

P.S. In other news, our family reached the 6 month mark of being together! This was a huge milestone for me as in our first home study with the girls home I asked our social worker, “Things have been really good and surprisingly easy, do you think this is just the ‘honeymoon period’?” and she said “Well, they seem pretty adjusted, but I’d say if you make it to 6 months without any real issues you’re probably home free”.  So I’ve had it in my mind and counting down the days ’til this moment. Not to say we 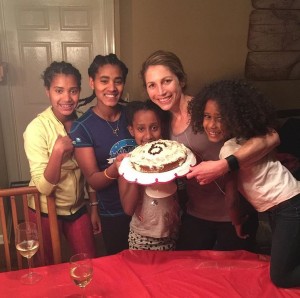 have not had our challenges, and there are many more to come, but we are so thankful for God’s abundant grace for the transition.  We celebrated together with toasts, cake and sharing stories of our favorite moments of the last 6 months! So much more I could say about this journey but tried to keep this one strictly to running, so to be continued….