Battling the Central Park hills in the Oakley Mini 10k

When I look back on Summer racing of 2014, I will remember two things: a fun and successful string of road races, and enduring a lot of pain!

Since I last blogged, I continued my binge of 10kish distance races with Bolder Boulder 10k: 3rd place team finish and

More recovered and savoring the atmosphere with other American runner friends

16th individually, and a 9th place finish at the Oakley Mini 10k in a strong international field. Bolder Boulder was one of the hardest races I’ve ever run, the combo of the heat, altitude, and mostly uphill first 4 miles left me in a wheelchair for the first few minutes after I staggered across the line. However, I will never forget the crowd support the whole way and the roar of a packed stadium finish. The mini 10k was a bit less dramatic, and I enjoyed getting to celebrate my love for running with so many other awesome women in the longest running all-women’s race!

I had an uptempo cool down after the race, so as I cruised around the Central Park reservoir dodging runners, I hopped up on a slanted curb that was slick from the morning rain and wiped out straight onto my chest. Once the race endorphins wore off, I realized I couldn’t move my elbow and had pain in my chest, and subsequent X-rays showed a cracked elbow and rib. Throughout the coming weeks, I trained through my broken rib as I had been advised that it would hurt, but running wouldn’t make it worse. Sure enough, it hurt like heck for a month, like I was being stabbed continually in the chest, but the pain eventually subsided and finally went away the week after I placed 2nd in the US 10k championships at Peachtree in Atlanta, Georgia, one of my favorite races with a crowd that never disappoints and a challenging course. Right after the race, I flew to DC for my layover on the way to visit my sister in Senegal, which

Now this is a post-race celebration! 4th of July on the Lawn watching fireworks

happened to coincide with 4th of July night where I took advantage of my best friend working in the White House and joined her for fireworks on the White House lawn! It was a surreal moment and unforgettable experience. 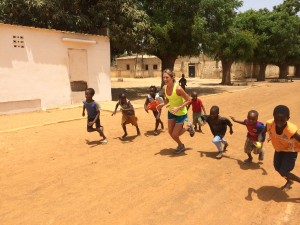 Keeping the training up in Senegal, with some company on my strides

After a short trip to Senegal, it was back to the grind, turning the corner on marathon training and winning the Destination Races Napa to Sonoma half marathon. This was a fun win for me as it was just miles from the home where I grew up and had a lot of family waiting for me at the finish. Running through the hills of the wine country will always remind me of falling in love with running growing up in Sonoma County!

6 short days later, I competed in the US 7 mile championships and placed another 2nd. I was proud of how I ran this race forcing the pace in front of the chase pack (Molly Huddle was out of sight!) for the majority of the race. Bix was an extremely challenging hilly course, and it was rewarding to finally head down the steep hill and cross the line. From Bix I headed up to higher grounds in Mammoth Lakes for a couple week training stint with Mammoth Track Club and helping out with the Altitude Project Christian running camp, a camp Ryan and I have been involved with for 10 years now! While in Mammoth, I felt like my training went to another level, finally fully focused on the marathon and loving grinding out hard long runs and 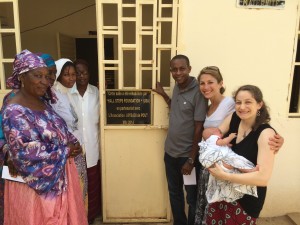 Visiting the maternity clinic in rural Senegal renovated by The Hall Steps Foundation (with my new niece Aby Zahra!)

longest-ever tempos. My body was adapting surprisingly well to the increase in work load and I was enjoying having plenty of energy left to fly around the lakes at 9,000 ft on easy days.

Just when I was starting to feel invisible, disaster struck. Out of nowhere after a great training day, I woke up in the night with what felt like food poisoning. 36 hours later of the most painful sickness I’ve ever experienced, they figured out it was apendicitus, and unfortunately we didn’t catch it in time and my appendix ruptured, spilling toxins into the surrounding areas, a potentially life-threatening situation. To this day they don’t know what causes appendicitis, it just strikes you one day and this was mine, in the midst of my best training block ever.

Immediate surgery followed by 4 days in the hospital and my world suddenly was turned upside down. I was in extreme pain in the hospital and could hardly hobble down the hallway, pushing my IV. It’s been all progress from there and I am thankful my recovery has been ahead of schedule, but it took me two full weeks before I was able to run, and when I was, it was a pitiful shuffle while my body regained its strength. As I returned to training, it is hard to imagine that in such a short time your body can change so much- from being in the best shape of your life to “ground zero”.   I had lost weight and muscle from essentially not eating anything but IV fluids for 5 days, and after being on super-all-life-killing antibiotics I could hardly get off the couch.  It’s easy in these moments to dwell on what was lost and have a “why me, why NOW of all times?!” pity party. It took intentionally focusing on what I was thankful for, and thanking God for that, and worshipping Him to keep myself on a positive track. 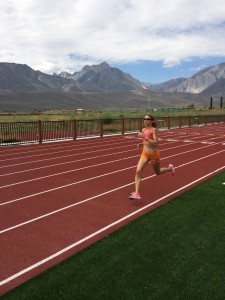 Chugging away in Mammoth Lakes before disaster strikes

I am happy to report that despite the slow start, my running is coming back quicker than expected! I’ve adopted the diet of a college freshman guy (burgers, pad thai, and pizza) and am back to my more normal strength.  I’ve still been dealing with some issues like running through stomach cramping/pain, which between this and my broken rib seems to be the theme of this season. I’m hoping it is preparing me to tolerate even more pain in my racing when I’m finally back at it! And in the meantime, I truly am taking joy in the journey. I’m celebrating the progress, even if it’s something before I would consider insignificant, like running 8-minute mile pace on a run. I love the feeling of running hard and pushing myself, and feeling your body responding and getting stronger. So rather than dwell on 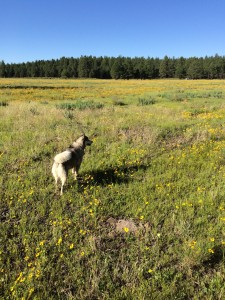 A new season begins in Flagstaff- starting with a walk, progressing to a shuffle, and finally back running. Enjoying the beauty of my surroundings and the joy of the journey!

races I won’t get to do, like a Fall marathon, I’m focusing on the joy of getting to do what I love again and no longer being in constant pain (and being alive!). I am hopeful I will still get to debut in the marathon, though a bit later than I had planned, and be back out at the races soon!

Huge thanks to my husband for rarely leaving my side in the hospital and sneaking me in Thai food when I was supposed to be just drinking broth and eating wretched hospital pudding J (Though no thanks for losing my engagement diamond ring that I took off before surgery- oops! This operation just got a bit more expensive!) And also thanks to John Ball at Maximum Mobility for busting through all the restricted areas that were putting me in so much pain after being released from the hospital and Steve Magness for once again having to scratch our plan and start a new one. I am thankful for the support people God has brought into my life and all the encouragement from running friends near and far!